Poemage and RhymeDesign are poetry-analysis tools created by Nina McCurdy et al at the University of Utah. Using the CMU Pronunciation Dictionary, RhymeDesign detects sound patterns connecting words within a piece of text, outputting the results as a text file encoded in the project’s custom-written formalism. Poemage, which is built on top of RhymeDesign, adds a GUI to this process, allowing the reader of a poem to select the sound pattern that they would like to see highlighted in the poem text. (see Fig.1) 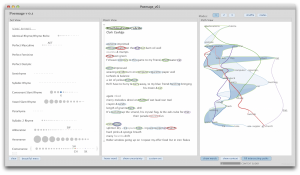 The interface traces paths of sound through the poem, allowing the reader not only to pick up on any sonic patterning that they may have previously missed, but also to see easily how these sound patterns relate to the visual layout of the poem.

The source codes for both programs are currently available from McCurdy’s website, with a web version of Poemage mentioned as an forthcoming feature. One project that I am currently developing will potentially make use of RhymeDesign’s sound analysis to create a different way of displaying, and also moving between poetic texts. (Hopefully to make an appearance on this blog in the near future!)