I recently completed a three-month-long work placement at the British Library as part of my PhD. The main brief for the placement was to research artists’ books within the library’s collections for possible inclusion in a planned future exhibition. Towards the end of my placement, I was asked to put together a small ‘show and tell’ session with some of the contemporary artists’ books that I had found. Among all the hand-bound limited editions and experiments with book materiality, I also included the graphic novel Here by Richard Maguire. Although the our working definition for an ‘artists’ book’ while planning the exhibition was very broad, and the ethos within the team was extremely open-minded, it still felt like something of an indulgence, a guilty pleasure, to include the book in the selection. I found myself more than once describing the book as being ‘sneaked’ into the presentation, as a graphic novel that I had tried to disguise as an artists’ book to justify its inclusion.

So imagine my delight when, after leaving the library, I happen to look at the page for Here on Maguire’s website and see, right at the top of the page, the words: ‘an artist book disguised as a graphic novel.’ I had visited Maguire’s website before, but had never noticed this perfect little introduction to the work. If I had, it is safe to say that my self-consciousness about including it in the session would have been greatly diminished. With this newly found bit of pretext, then, I’m now going to give a brief account of Here, thinking about it in terms of an artists’ book.

Published in 2014, and based on the 1989 short comic strip of the same title, Here tells the story of one particular spot on the planet. For much of the book, this point in space is occupied by the living room of a house in the 20th and early 21st century. But the narrative also stretches beyond the life of this house, into the distant past and future, showing the same spot as prehistoric swamp, nineteenth century pasture, and toxic future wasteland. Each double-page spread is a glimpse of the exact same view at a different point in history, with the book serving as the window. Their sequence is non-chronological, and so the reader, turning the pages sequentially, often jumps backwards and forwards in time, leaving and re-joining individual narratives that make up the larger story of this place. 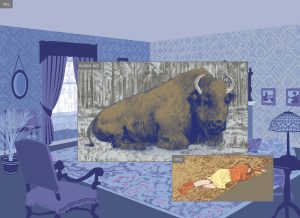 One significant effect of this narrative style is the sense of simultaneity created, that somehow these events are all taking place at the same time through our immediate and seemingly random access to them as we progress through the pages. This is drastically heightened by the main formal innovation that Maguire brings to comics in Here, which is the layering of smaller panels on top of the larger main panel to display different moments in time on different parts of the scene simultaneously on the page. The sense created is one of time periods bleeding together, overlapping to the point where they might merge completely.

In terms of its use of the book form, then, which was the key lens through which I was looking at the British Library material, Here uses its structure to bind all of these time periods in physically in one place. The book is a piece of art and literature that challenges the reader to think about how we conceive of time and space in relation to one another. This is something that the comics form has always been particularly concerned with, but in Here Maguire extends this play with space and time to include the book-object itself. The book as a means of organising information is often brought into play, for instance. One spread might only show a scene from 1935, and so be ‘about’ that moment, another might simultaneously show three people each dancing in different parts of the room, each separated by several decades, and so these pages are ‘about’ the dancing that has taken place in this place over history. (See image below.) The book constantly shifts over perspective on the relationship between time and space, with each turn of the page resembling a twist of a kaleidoscope, showing a different way of seeing this space and its past. 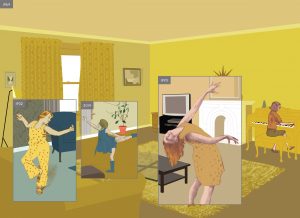 All images are from Here by Richard Maguire (Hamish Hamilton, 2014). Continue reading my enthusiastic ramblings about this book over on my other blog, Alternate Timelines, where I discuss Here‘s relationship to digital media.